Central vacuum systems which rely on momentum to separate dirt from air are known as “fully cyclonic” or “true cyclonic” systems. They are advertised as “filterless”, which is only partially true – all have a coarse mesh screen to protect the motor from lightweight debris which can get past the cyclonic separation and would otherwise be sucked into the fan blades. The two most common fully cyclonic systems are made by Vacu-Maid and Vacuflo. Both have been manufacturing systems for decades, and both produce high-performance, well-made systems. However, I believe the Vacuflo to be a superior system due to the design of the cyclone separator. 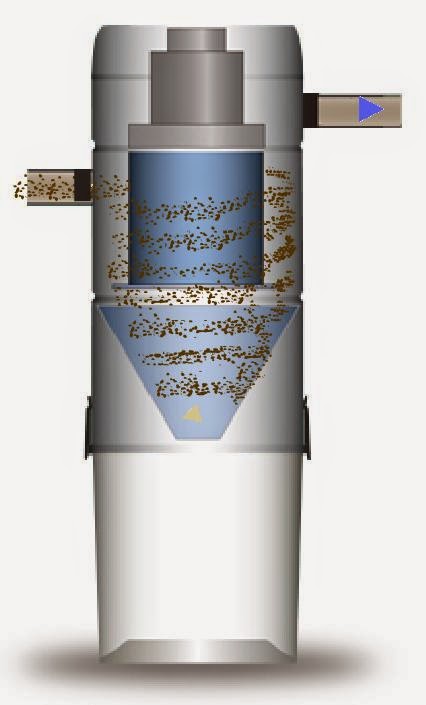 This is a diagram of the Vacuflo system. The screen is located at the bottom of the “top hat” above the cone. Dirty air enters tangentially at the top of the chamber, and swirls downward around the “top hat”. Air and dirt are compressed as they reach the flange at the bottom of the “top hat” (in a design patented by the inventor of the Vacuflo system in the 1950’s), and the air turns and enters the screen. The momentum of the debris causes it to continue downward around the inside of the cone, until it reaches the bottom and drops into the bucket. The Vacuflo system is close to the design of a “theoretical cyclone” and achieves a 96 to 98 percent separation efficiency. Motors in these units are known to last for decades, and buildup of dust on the fan blades is minimal. 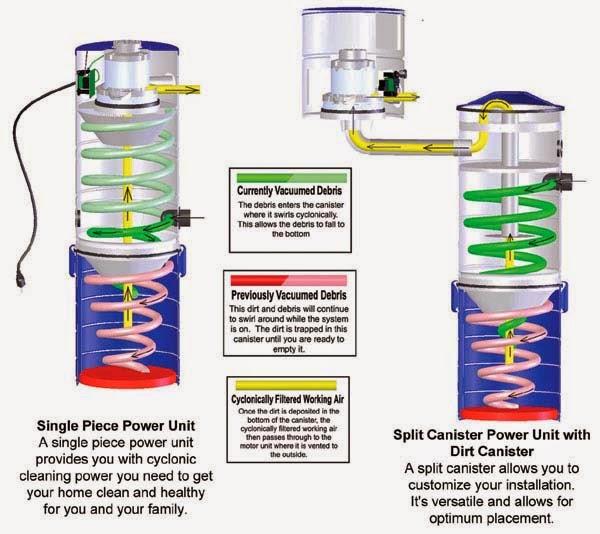 Here is a diagram showing how the two types of Vacu-Maid systems (single piece and split canister) work. Notice how, on both types, air and dirt enter and make an immediate sharp 90 degree turn. Not only is this type of intake much less smooth for the airflow than a tangential intake, the sharp 90 elbow is prone to clog with debris that has made it through the rest of the piping system. On the single piece unit, the intake elbow is placed near the bottom of the separation chamber – causing the air (and quite a bit of the dust) to be drawn upward to the screen. The screen on a Vacu-Maid gets dirty more quickly than the screen on a Vacuflo for this reason, and yet is more difficult to clean, being located higher up in the canister (inside the upper cone, just below the motor). It is very hard to completely clean this screen. Vacu-Maid’s answer to this problem was the split canister system. In this type, the intake elbow is located near the top of the chamber, which is an improvement. Dirt and air swirl around the standpipe in the middle of the canister, until reaching the flange attached to the bottom of the standpipe. This is more similar to Vacuflo’s design, but carries a major disadvantage in that the 2” diameter pipe has much higher velocity air flowing through it than the 7” diameter screen on a Vacuflo unit. This causes debris to be sucked through the standpipe more readily than it would be if the surface area were larger. Air and debris that enters the standpipe goes up to the top and makes a U-turn to enter the screen from above. While this makes the screen much easier to clean (just lift the lid off the top of the unit), it causes objects that would normally drop off the screen when the system is shut off to remain there until the screen is manually cleaned. Things like tissues, Styrofoam peanuts, lint, etc. build up quite readily on the screen of a split canister Vacu-Maid system, which is why the owner’s manual cautions against vacuuming such items up. If picked up by a Vacuflo system, those objects would cling to the screen until the system was turned off, and at that point would drop off the screen into the bucket. The Vacu-Maid separation design achieves only about 90 percent efficiency, and lets much more lint and dust through the motor’s fans. For this reason, a ten year-old Vacu-Maid system is quite a bit noisier than a brand new one, and the only way to remedy the situation is to replace the motor. I have video clips (which I will post) of a Vacu-Maid S3200 running and a Vacuflo 960 running. These systems have the same exact motors, and had a similar amount of usage on them (verified by checking motor brush length). The difference in sound level is dramatic. Were the cyclonic separation of the Vacu-Maid as efficient as that of the Vacuflo, the motors would run just as smoothly even after years of use.
Posted by Unknown at 11:55 AM 2 comments:

This homeowner had an existing Vacu-Maid system, about ten years old, in their large Oak Brook, IL residence. I was here to remove a clog and commented on how much quieter the outside exhaust would be with mufflers in the exhaust lines. This resulted in a return visit to install the mufflers and move the unit a few feet down the garage wall. Check out how much nicer the installation looks now: 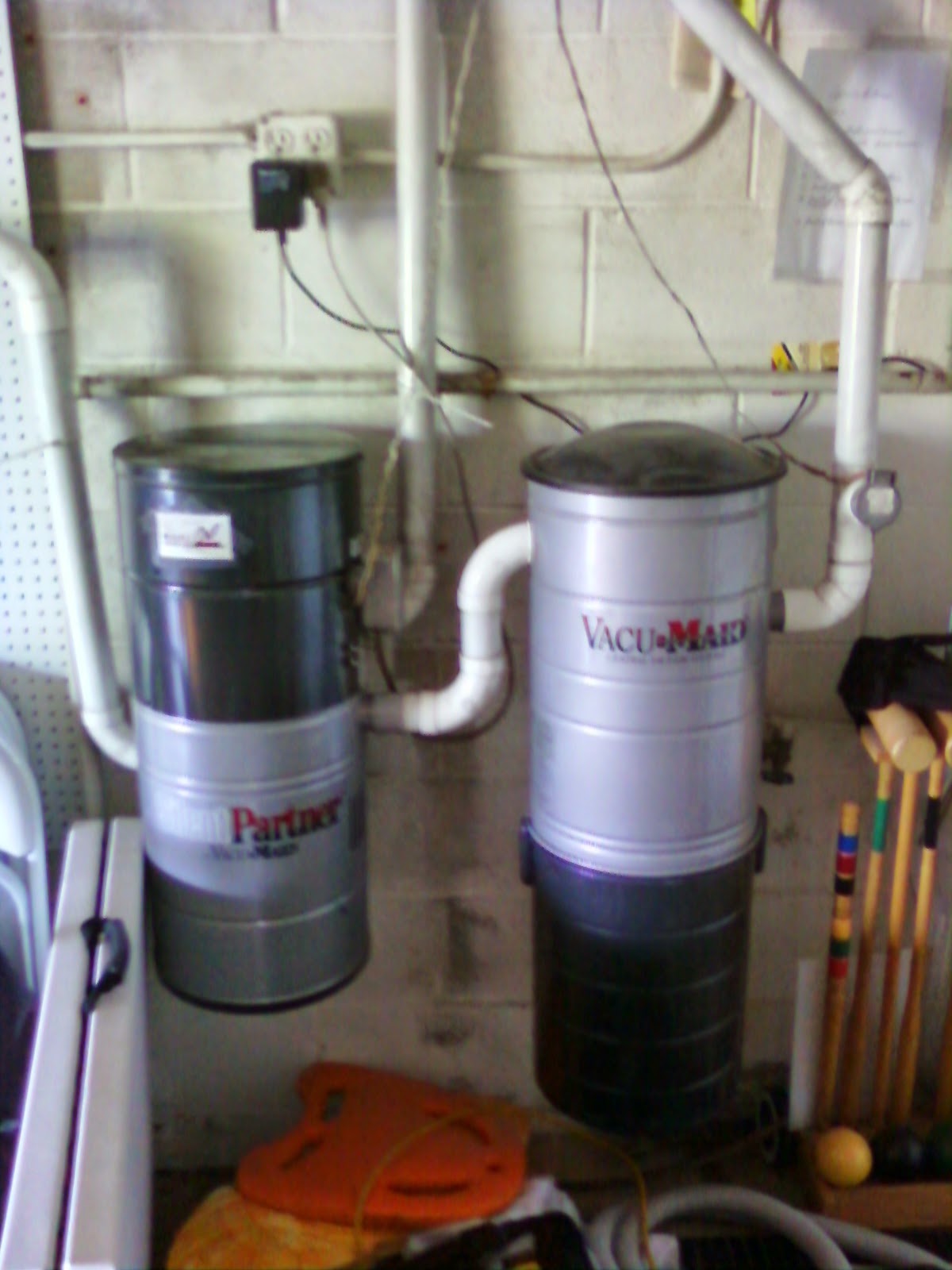 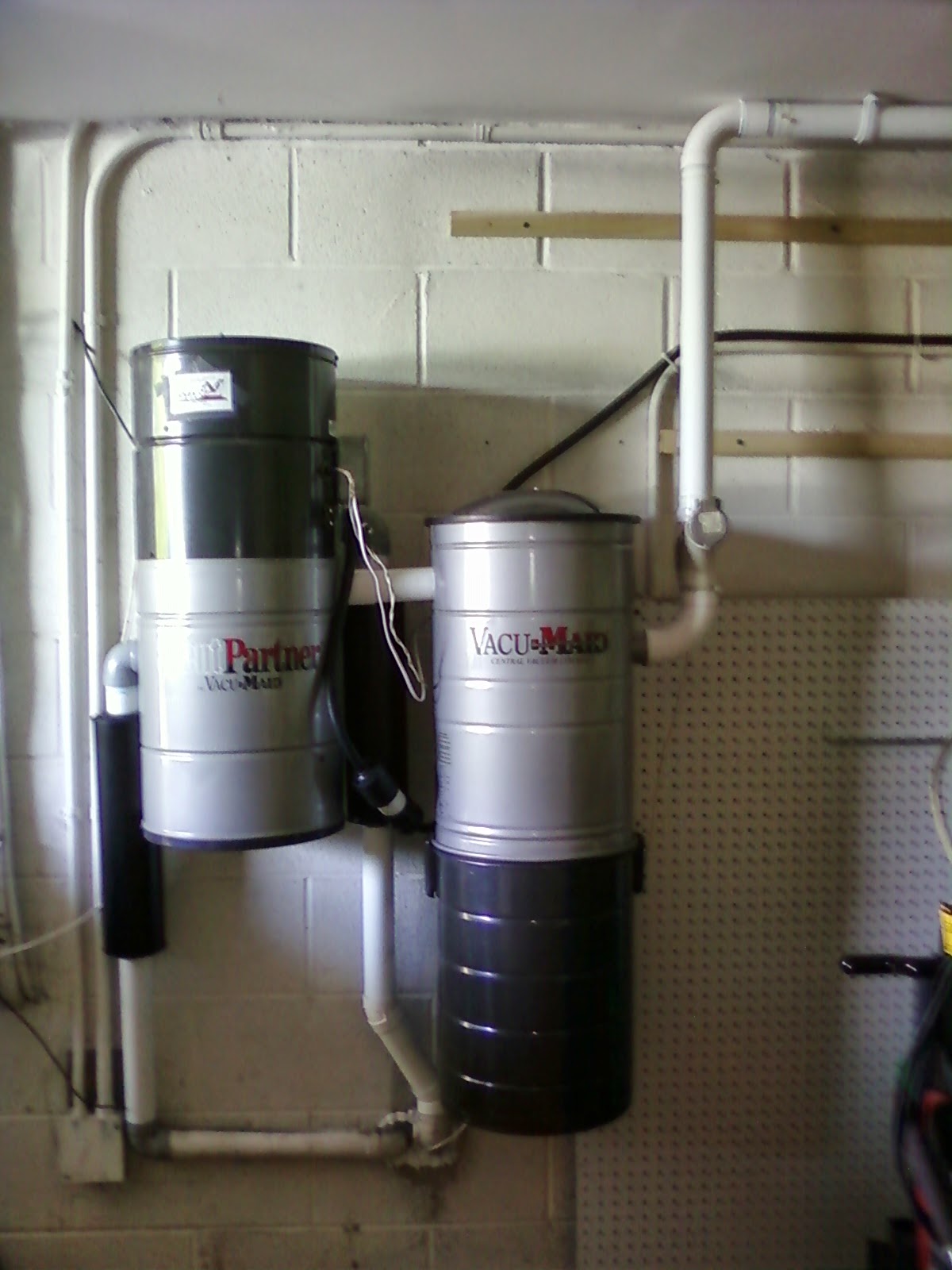 The home originally had an old Filtex system (original brass inlets still in place), which at some point had been replaced with a Vacu-Maid P325 (you can faintly see the outlines of the brackets for the old unit). Heavy use caused that system to need replacement, which is when this one, a Vacu-Maid S3200 was installed. Very powerful, but noisy and the cyclonic separation in these units is inferior. I'll elaborate exactly what I mean in a later post...
Posted by Unknown at 4:08 PM No comments:

I ran across this in a service call the other day. The pipe coming from the lower left of the picture is a main line, which picks up a basement inlet then makes a right turn and continues on to the unit. Not only does the tee drop out of the main line at a 45 degree angle (filling the basement inlet with dirt), the pipe from the basement inlet makes a U-turn, forcing the air (and dirt) to do the same thing.

Here's the after shot. Not only is it better for the airflow, it avoids dirt from the main line ending up sitting in the basement inlet (and it took one less fitting than the prior arrangement to install).

Posted by Unknown at 1:53 PM No comments:

Welcome to my blog!

I live and breathe central vacuums.

Here I'll provide information above and beyond what's covered on my website http://www.justcentralvacs.com/. Check back often!
Posted by Unknown at 1:20 PM No comments: