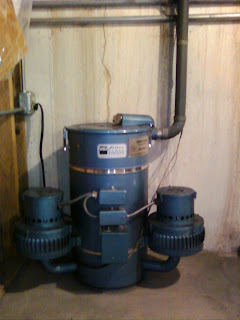 Here's a very unusual unit, especially for a residence -- a Filtex model CTS-500, installed in the mid-1970's when this Oak Brook, IL home was being built. This unit was originally offered as a commercial system, due to its long-life, slower-running 7.5" motors. How it found its way into this house, it's hard to say. The subdivision has quite a few homes with Filtex systems, mostly TC-600L units like this one below: 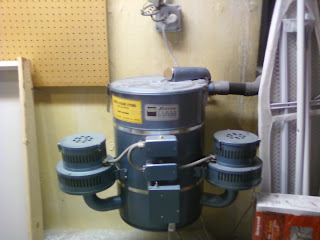 The TC-600 uses 7.2" motors, draws slightly higher amps and creates noticeably greater end-of-hose cleaning power. Both systems displace a maximum of about 230 CFM, but the TC-600's higher waterlift (110" vs. 88") enables it to better overcome the resistance of a 30 foot hose plus the piping system.


It is interesting to note that this CTS-500 was set on the floor, instead of being wall-mounted like most central vacuum units (including nearly all of the old Filtex systems that I have seen). Filtex units are one of the very few systems that could actually sit on the floor, owing to their externally-mounted motors and flat-bottomed canister.


This homeowner was in love with the system, and decided to replace the worn-out motors instead of opting for an entirely new power unit. I can't say I disagree -- what other system today has a 16-gallon bag capacity, and motors that can run for 2000 hours? This system will be working long after most of the neighbors' central vacuums have died. "They just don't make 'em like they used to."
Posted by Unknown at 8:03 AM 1 comment:

When I supply do-it-yourselfers with fittings and tubing to install a central vacuum system, often I am asked why I only supply 45 degree "wye" fittings instead of the much more common 90 degree "tee" fittings. The main reason is, everything you can do with a tee, you can also do with a wye. In fact, you can make a wye into a tee just by adding a street 45 elbow. However, there are lots of things that you can do with a wye that just cannot be done nearly as well with a tee. Like this example I found during a service call in Winfield, IL recently... 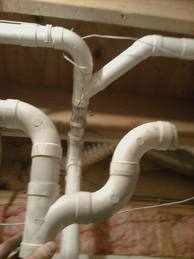 We have here a main trunk line that converges to the power unit mounted on the basement wall below. Arranged with a wye fitting, dirt from either side only has to make a 90 degree turn. The original setup (which I am holding up for the photo) using a tee forced dirt coming from the right to go through three 90 degree elbows, or 270 degrees in total.