My good friend Tom Gasko is the curator of the Vintage Vacuum Cleaner Museum in St. James, Missouri. Three years ago when the museum opened, I drove down to see it (not every day do you see 400-some vintage vacuum cleaners, all beautifully restored, arranged by decades in period-furnished rooms), and to install the museum’s central vacuum system. Tom has always known about my passion for all things central vacuum, and in the past has given me some very early (1910s) literature about central vacuum systems.

Well, last year Tom called me and said that an “Arco Wand” central vacuum had been donated to the Museum. The Arco Wand is one of the very earliest residential central vacuums, made from about 1910 into the 1920s. Never having seen one in person, I made plans to go down and pay Tom a visit as soon as possible. 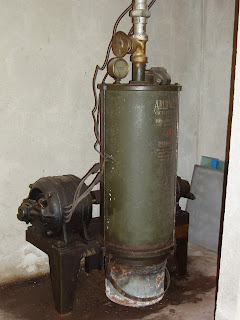 Here’s the machine, in a picture provided by the donors before they removed it from their basement. The biggest thing on our minds was, “does it run?” I was aware of the hazards in applying power to something that’s nearly a century old, and probably hasn’t been used in decades. So, we dragged it outside – easier said than done, since it weighs a good 300 pounds. Plugging it in, it sparked and smoked, the motor slowly turning but never getting up to speed. After some investigation, I adjusted the carbon brushes, finally getting it to run. It had some rust holes that needed to be sealed, but ran just as well as it did 90 years ago. Here’s the result, captured for eternity on video (thank goodness for camera phones!):

This system, with its positive displacement “Roots” blower, generates lots of waterlift, but low CFM. The system was designed to make optimal use of this – 3/4” hose and wands, narrow-slot attachments. While the suction feels weak by today’s standards, it was better than any portable vacuum at the time.

This Arco Wand now sits in the 1910s section of the Vacuum Museum, ready to be fired up for any curious visitor.
Posted by Unknown at 9:11 AM