In the past and even today, some inlets are used that do not fit the industry standard form factor of the inlet valves in Part 1.  Here I will cover some of those inlets, their features as well as how to update them to modern, standard inlets.

The very earliest central vacuum inlets were just terminations for the piping, without any electrical contacts to activate the system.  Up until the 1950s, systems were installed with threaded iron piping, and inlets were similarly threaded into the piping.  Here are two examples from early 1900s systems: 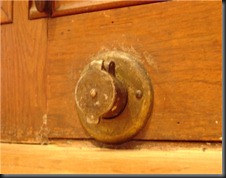 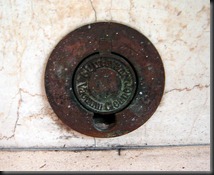 It would be theoretically possible (though not often attempted) to adapt modern inlets to the threaded pipe size and run low voltage wire for activation of a modern system.  These older systems were turned on from a central point and designed to run continuously until cleaning was completed, similar to the way large commercial systems of today are operated.  A modern residential system should make use of low-voltage wiring or a wireless remote control.

Starting in the 1950s, small but powerful universal motors and lightweight, low-cost PVC tubing combined to make central vacuum systems a much more affordable option that began to be included in homes of all sizes.  One early pioneer, Filtex, made a very popular, high-quality system and manufactured their own inlets and attachments.  The original inlets used in the 1960s and occasionally seen into the late 1970s had a round door, with a momentary pushbutton to start or stop the power unit, and a light to indicate when it was running: 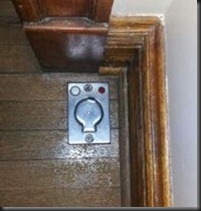 A nearly identical inlet was used by Central Vac International during the same time period, though there were slight cosmetic differences.  Many times when putting a system into a house that was already built, installers would put these in the floor, as shown here.  If the family pet walked over the button, the system could run for hours before it was discovered, causing the motors to overheat.  This concern, plus cost and aesthetic considerations, caused Filtex to develop the simpler Automatic-type inlet: 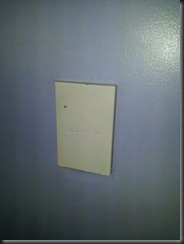 This inlet was usually supplied in painted ivory, though stainless steel, polished brass, and antique bronze were available too.  It had a plunger switch inside that turned the system on when the door was opened: 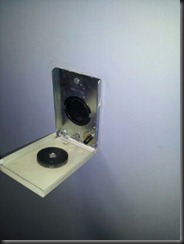 Many, many systems in the Chicago area use this type of inlet.  Most modern central vacuum hoses fit loosely and can pull out, but we stock a hose that fits perfectly and is much lighter weight than older hoses.  Just make sure when calling to mention that you have a Filtex or Air-Flo central vacuum system to get the proper hose.

Both styles of Filtex inlets can also be easily replaced with industry standard covers, which turn on when the hose is inserted, and allow the use of convenient low voltage hoses having a switch right at the handle.

Another pioneering central vacuum manufacturer starting in the 1960’s was NuTone, famous maker of door chimes, bath fans, intercom systems, and other built-in home conveniences.  From the beginning, NuTone manufactured their own distinctive inlets: 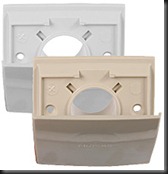 These inlets, still used today, are notable because of their nearly square shape, screws on either side of the neck, and an inside diameter just slightly smaller than the industry standard 1 1/2” – enough of a size difference to cause standard hoses to fit too tightly, and not bridge the contacts to activate the system.  It is relatively easy to change these inlets to standard Hayden or Canplas inlets, but CycloVac Deco inlets are especially easy to retrofit.  As an alternative, you can request any type of hose to be modified so that it fits NuTone inlets easily.

Vacuflo inlet doors have always been unique and easy to distinguish from standard inlets.  In the 1950s and 1960s, Vacuflo systems were installed with thinwall metal tubing.  The system turned on when an inlet was opened, thanks to a pair of contacts in the inlet door hinge.  Inlets looked similar to standard “Round Door” inlets, but with a wider “pull tab” at the top: 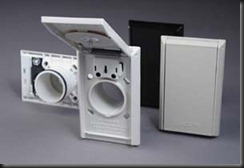 These turned the system on when opened, and included a provision for a low-voltage hose to be used (far in advance of the technology in use by competitors at the time).  Exact replacements are still available today, as are the special low-voltage hoses with two pins which make contact with the two holes above the inlet opening.  Alternatively, it is possible to update to standard inlet valves using an adapter plate between the original rough-in frame and the new inlet cover.

One widespread proprietary inlet valve design was used by Sears Kenmore central vacuum systems in the 1960’s and 1970’s, before the company switched to standard tubing, fittings and inlet valves sometime in the ‘80’s.  The first incarnation required the user to press a brass contact strip once to start the system, and again to stop: 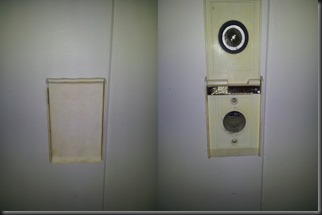 Like the original Filtex inlet valves, these required the user to manually start and stop the system, and could allow the motor to run with all the inlets closed.  Once these problems became apparent, Kenmore systems by the mid-1970’s had inlets that turned on when opened, and off when closed: 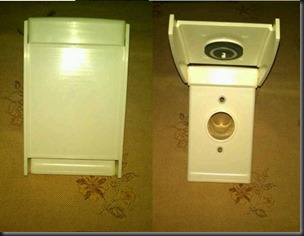 Black & Decker was another innovator in the central vacuum industry, developing their own power units, tubing, fittings and inlet valves starting in the 1960’s.  These systems were marketed by WalVac, Inc.  Inlets were unique in several ways: First, they were installed without a mounting plate, simply friction fitted into the 90 degree elbow, and fastened to the wall with three toggle bolts.  Second, they activated the system with a push button under the inlet hole, which was contacted by a flange on the hose end.  These provided the same effect as modern inlets (turning on upon hose insertion and turning off upon removal), and allowed the use of a non-latching relay.  Original versions were brushed aluminum, and had a unique oblong shape: 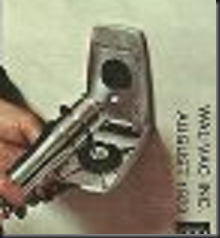 Sometime in the 1970’s, Black & Decker began to make the inlets out of plastic, with contact points in the inlet neck like industry standard inlets.  However, these were dimensionally the same as the original style, and thus required a hose just slightly smaller than the industry standard 1.5” in order to fit properly.

For lack of pictures, I have left out at least one rarely-seen style from the 1960’s; that which looked like the early Filtex/CVI push-button inlets, but had a second push button in place of the red light – one to start, one to stop.  I ran across this type of system once, on a “Turbo Vac” installed in Lisle, IL.  While I didn’t think to get a picture of the inlets, I did snap one of the unit: 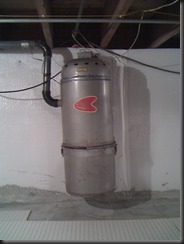 It’s my hope that this information has been informative and interesting.  I would love to hear from owners of any of the above systems, whether you have a need for service or just would like more info about your system.  Also, if you have a system so unusual you don’t even see it here, it would be especially helpful to me for you to send photos of your system to:

My plans for world domination will not be complete until I have cataloged every known variation of central vacuum inlets known to man!  Buwahahahaha!