The Filtex Corporation began in the 1930s in Los Angeles, making a tank-type vacuum cleaner similar to Electrolux.  Their first models looked like this: 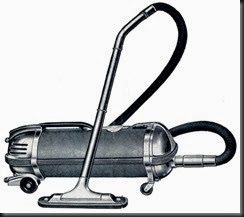 Most every portable vacuum manufacturer made a unique set of attachments to go with their vacuums.  Filtex was no different, and their attachment set (including patented “Rollex” carpet tool) was one of the finest: 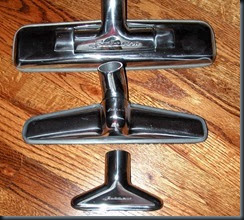 During the 1950s, as lightweight PVC tubing, modern low-voltage controls, and small but powerful universal-type vacuum motors combined to make residential central vacuums a much more affordable concept, Filtex became one of the pioneers in this field.  The power unit they manufactured was called the “Perma-Vac”: 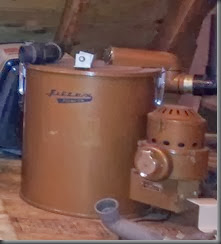 A distinguishing mark of all Filtex machines is the casting on the lid, which is actually an airflow duct which directs debris into the bag.  It also incorporates a utility inlet valve for cleaning near the machine.  This lid casting allows the bag’s cardboard rim to rest at the top of the canister, instead of on a rim several inches down as with competing designs (Modern Day and Central Vac International).  While this makes emptying easier, the tight bends can clog easily, and reduce airflow at a rate equivalent to 40+ feet of straight pipe: 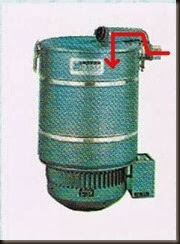 Initially the Perma-Vac unit was made concurrently with Filtex tank vacuums.  However, soon thereafter, Filtex stopped production of portable cleaners, and focused their entire business on built-in vacuum systems.  The Perma-Vac, with its single small motor, only worked well in small homes with two or three inlet valves.  The machine could be ordered with or without a low-voltage control, which used a doorbell button at each inlet to start and stop the machine, and a light to indicate when it was running:

By the late 1960s, Filtex had several machines available to handle larger installations: 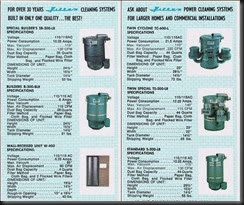 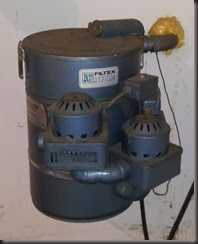 The “NMC” logo on the nameplate above stands for Natter Manufacturing Corporation, which had purchased Filtex years earlier.  The company was now based in Temple City, California, where it remained for nearly twenty years.  In the early 1970s, “VSI” started appearing on the nameplate – this was now the parent company of Natter Manufacturing.  Units also changed to a lighter blue color, and more models were introduced: 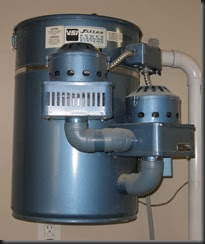 Those who purchased Filtex systems now also had a choice of “Pushbutton and Light” inlets (which used a latching relay) or “Automatic” inlets, which turned on when opened and used a more standard relay.  Automatic inlets soon became standard and it wasn’t long before the pushbutton-and-light inlets were discontinued. 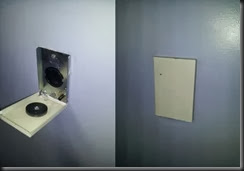 Filtex whole-house vacuum units looked largely the same throughout the 1970s, with the exception of two changes made in the mid- to late-seventies: the heavy aluminum airflow duct casting on the lid was changed to plastic, and the large chrome lid latches (which were hold-overs from the Filtex tank cleaners of the 1950s) were replaced with small, off-the-shelf toggle latches.

In 1980, the company was sold to Fairchild Industries, which moved production to La Verne, CA.  Machines made in the early 1980s show this address on their nameplates.

Several years later, Fairchild sold Filtex to Music & Sound, a Dallas-based manufacturer of home radio intercom systems.  Mid-eighties units will say “M & S Filtex” in script on the logo.  Several new models were introduced at this point, including their first enclosed dual-motor units (TSP700L) and their first triple-motor units (TM285L) which were inspired by MD Manufacturing’s triple motor units which had been successfully used in larger installations for several years already. 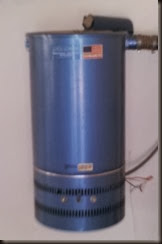 The late 1980s saw several significant design changes, and the new models had an “N” at the start of their model number: NTM285, NTC600, NTSP700, and so on.  The large machines that used to require a 120-volt, 30-amp circuit were now configured to run on a 240-volt, 15-amp circuit.  Parts like the bottom motor cover were now molded plastic instead of sheet metal, and the lid/bag gasket design was improved for a more positive seal.

Around this time, a cost-saving decision was made to discontinue the metal Automatic inlet valves, and the metal Filtex attachments.  This shift toward off-the-shelf inlet valves and attachments took away a big part of the uniqueness that distinguished Filtex from competitive systems.  The units, which had been light blue since the early 1970s, were painted very dark blue starting in the early 1990s: 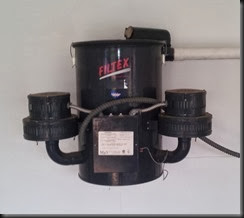 Another color change came in the late ‘90s, to a very light gray.  This coincided with the purchase of M & S by Chamberlain, manufacturer of garage door openers and other products.  Also at this time, nearly all dual motor designs were replaced with single motor units (FX2000, FX3000, FX800), the only dual-motor machine being the 240-volt FX900.  This was done as new motor technology allowed a single high-efficiency motor to produce cleaning power that previously was available only in a dual-motor design.  At the same time, the large flocked secondary filter was replaced by a very small (2 1/2” square) hidden filter that would plug with fine dust, greatly restricting airflow.

The early 2000s saw the Filtex name completely eliminated.  Machines remained unchanged, but now bore the label “AirVac”.  This brand had been manufactured by M & S since the mid-1980s, and up until this point was a line of bagless units with either one or two motors, and foam (later cloth) filters.  After the brand consolidation, rather than “Filtex” being a bagged machine and “Airvac” a bagless as before, the Airvac “Blue” name now indicated a disposable bag unit, and “Red” were the bagless models.  A new “Gold” series offered extra-quiet operation, and system monitoring technology that would flash an LED on the machine and at the inlet valves when service was required.

Around 2006, production in Dallas, Texas ceased, and the entire model range was discontinued.  The new AirVac Red (bagless) and Platinum (disposable bag) machines are no longer made in the United States.  Though several models are offered for different home sizes, the suction performance is very similar, and all models (even the 240 volt machine rated for 12,000 square feet) have only a single two-stage, 5.7” non-serviceable motor.  While good performers, the quality of these machines makes it apparent that their lifespan will be measured in years, not in decades.

Today, very little remains of the Filtex Corporation.  The units produced by its descendants bear no resemblance to those on which the company’s reputation was built.  Fortunately, Just Central Vacuums has a full stock of parts and supplies to keep old Filtex central vacuums working for decades to come.  Visit www.jcvacs.com or call (630) 608-0175 for help with your vacuum system.